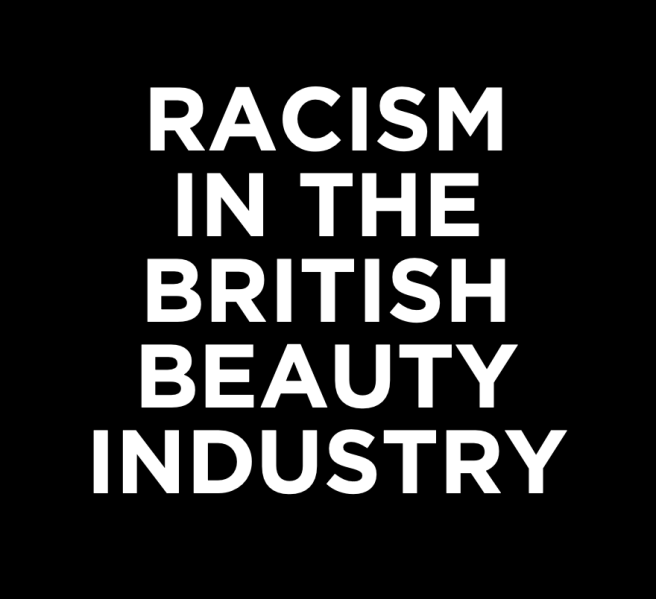 As I said in the first post of this series, George Floyd’s murder did not happen in a vacuum. It happened after years and years of Black people being treated as worthless and “othered” by every industry out there, especially this one. This one that says “sorry no shades for you”, or “nope no invitation for you” or “oops no budget to pay you”. Black people and some allies in the industry have been calling this out for so long (cc Jackie Aina and lots of Estee Laundry posts and highlights) and in the UK virtually nothing has changed.

For far too long the beauty community and industry has been dominated in all areas by white women who have acted like gatekeepers, closing ranks and elevating only those like them or whom they already have a relationship with. I have been on Instagram since 2013 and since then I have seen lots of white bloggers go on to grow their accounts into businesses through strategic partnerships, but for everyone else? Not so much. If you think there’s an “old boys club” problem in society I can assure you that white women have their own version in this industry.

In my original post on racism (here) I talked about how Black women are denied opportunities for growth and advancement at every level. The magazine and PR companies have a lot to answer for when it comes to this. They constantly prioritize white voices over any other, which then creates a hierarchy of worthiness that is steeped in prejudice. Of course this comes from the fact that their own teams are predominately white women and through that bias white bloggers are frequently given more opportunities regardless of stats and where Black people are scrutinized in a very serious way only to be deemed not a right fit. I know this because I had a friend who interned at a major PR firm just a year or two ago now and this is what she saw, as well as experiencing racism herself (I will not share her name as she still would like to work in the industry).

This interaction below perfectly encapsulates the issue I am talking about: 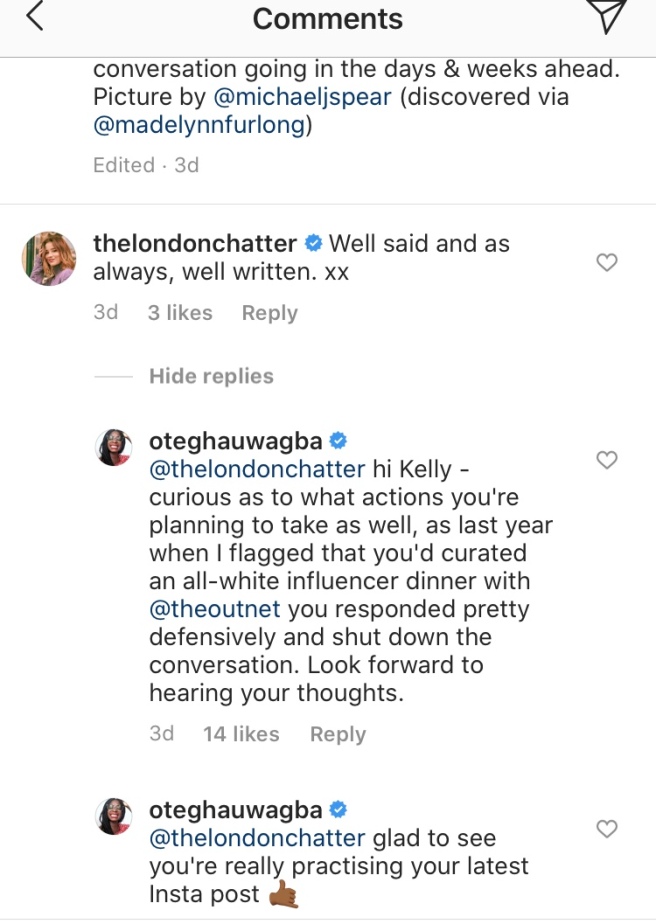 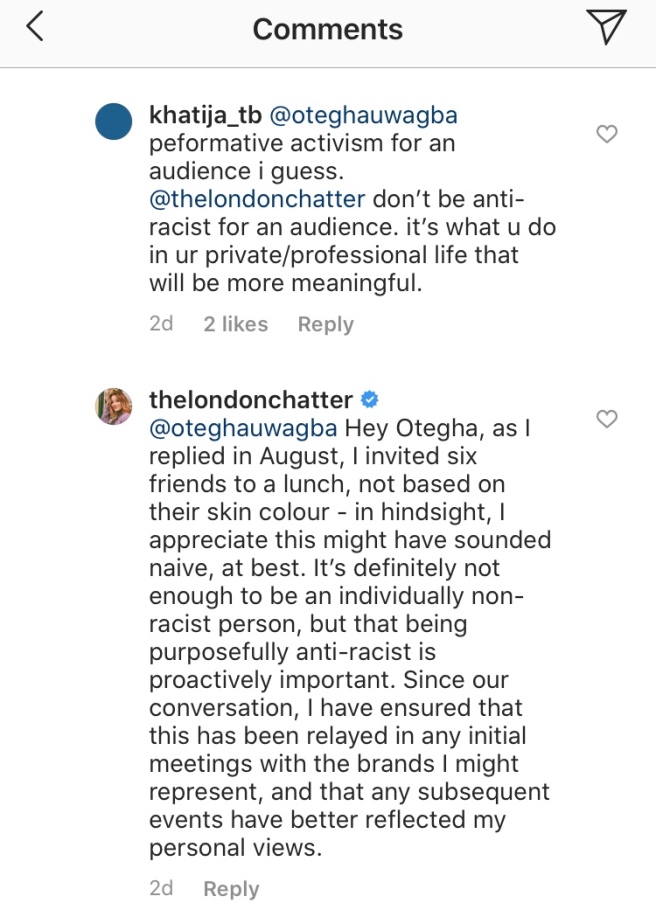 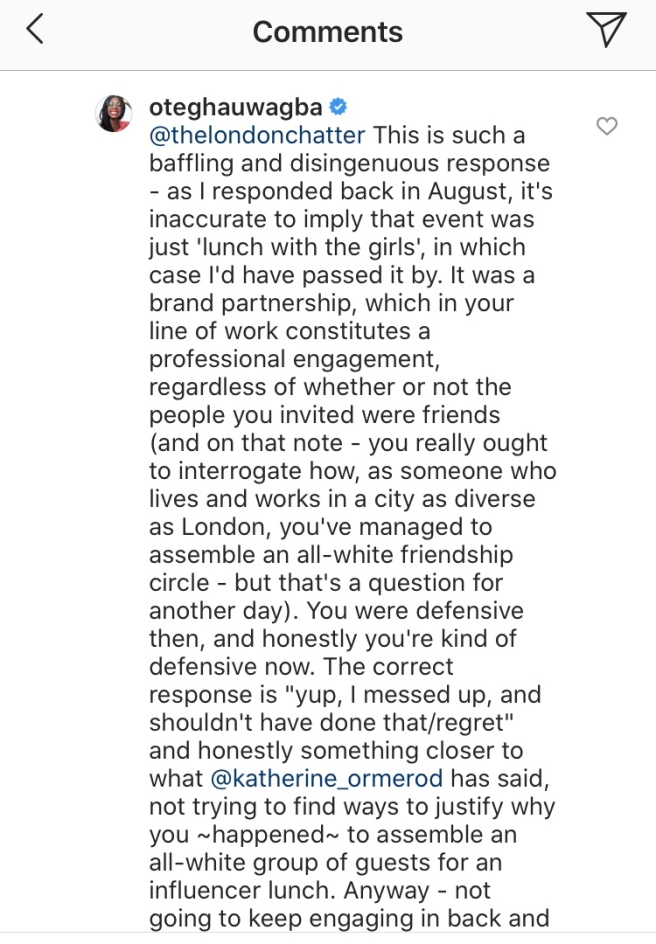 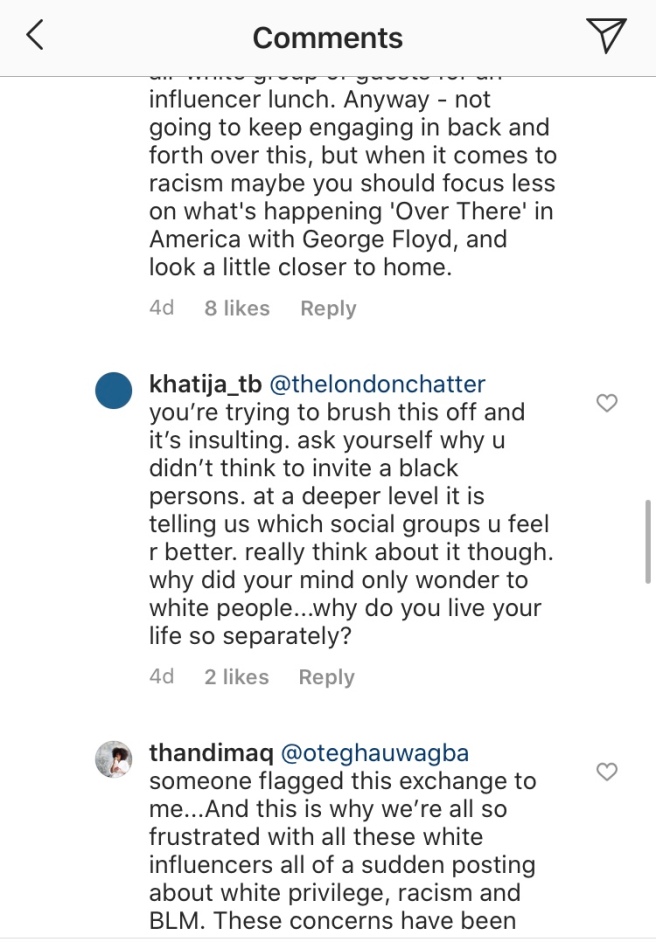 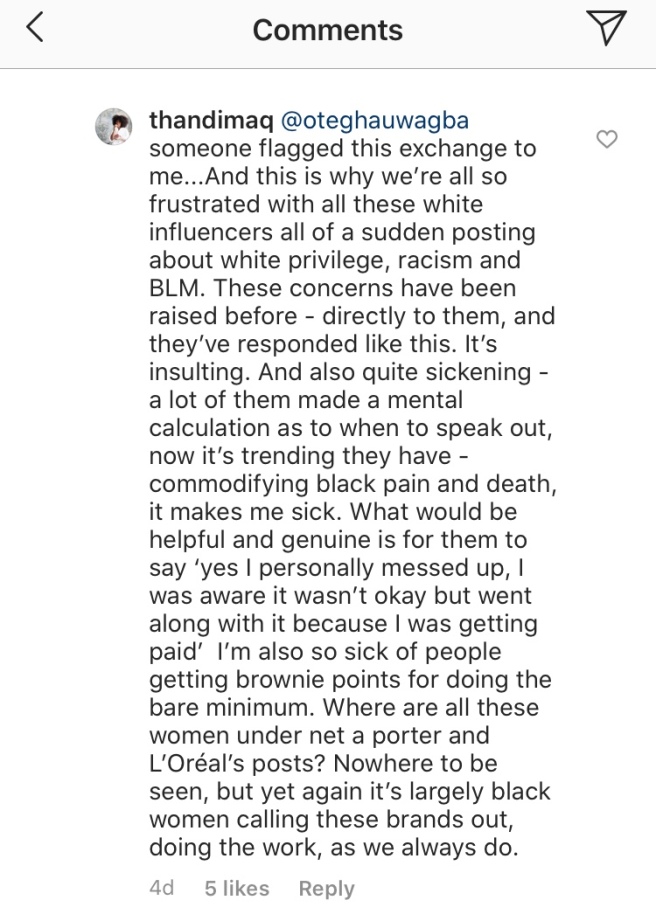 So a blogger held an event with The Outnet and invited all white bloggers. When confronted with it at the time she claimed it was just a lunch with friends. Just a lunch, with a major brand, with friends who are all bloggers. In reality, this was a professional event and not only that, a professional opportunity for everyone involved. For example, were the bloggers paid or compensated in anyway? Regardless of that, they where given the opportunity to form a relationship with The Outnet team possibly leading to further work. They would also gain exposure from being featured on the company’s social media sites. They would also gain legitimacy in the eyes of other brands from this feature, which could then also lead to more work. Inclusion lead to opportunities that become growth, advancement and capital. Can you see how this type of behavior perpetuates discrimination and disenfranchisement within the industry?

This event mirrors so many that I have seen within the beauty community. Majority white women and a token Black or brown person thrown in for optics or because they were lucky enough to make friends with the right/white person. This is what has been denied to Black and brown people in the digital age of beauty –  access to the opportunities for success. The white women in this industry formed a community for themselves where they supported each other, promoted each other and became close knit along the way leaving no room for anyone else. As far as I can see (maybe things have changed in the two years I was away) the landscape of who gets invited, who gets paid and who is accepted into the club hasn’t changed much at all (check out Pull Up For Change created by Jackie Aina and Sharon Chuter for more from brands and their team demographic).

A year or two ago when Sali Hughes was called out on why she hadn’t featured any Black women on her ‘In The Bathroom’ series she responded in a very defensive way. I know that now she has actually featured three Black people, but the fact that it’s just three people over the course of five years just reinforces the idea of tokenism. And maybe she will rightly say there were not enough successful or notable Black people in the industry, but that’s the problem. It’s a vicious cycle that keeps going around because nothing changes and no one is willing to tangibly address it.

In one episode Sali mentioned how much she loved YouTube because it was so egalitarian and remember thinking HOW can you honestly think that? How have you looked at the demographic of those who have “made it” on YouTube in the British beauty community and really thought it was fair? It should be. It really should be as easy as having a camera and uploading content but it isn’t. YouTube itself has already been called out for it’s discrimination, much like every other social media platform. I think that type of magical thinking is naive and harmful because it disregards structures that work to keep Black people invisible no matter how hard they try.

And of course she is not the only one. Lily Pebbles and The Anna Edit hosted a podcast interview show and over two series there was only one Black woman featured and that inclusion came from audience feedback. Without it would they have even bothered? Incidentally, on the flip side Anna recently posted a bank holiday playlist to Spotify which featured music from predominately Black and POC. This is racism – here for the culture but not here for the people. And again I get it, maybe they don’t know other Black people in the industry well enough, but do you know why that is? They’re never invited into your circles. They are not being asked to events and their businesses are not being supported within the industry. How many of you are close friends now due to the fact you’ve constantly been thrown together over the years and had a chance to get to know each other?

This all needs to change. While I do not believe anyone here intended harm, harm was done. Do you know what it feels like to constantly receive messaging about your worthlessness? I think seeing so much pervasive racism in a space I thought would be different affected me more than I realized. I am an extremely outspoken person but I found myself wanting to hide, be quiet and stay small. I wanted to fit in and be accepted, even by the people who had bullied me and excluded me. I remember feeling paranoid and angry a lot of the time before I left. Overly scrutinizing others for signs of racism. You know how disappointed you feel finding out that your fave actor is a sexual predator? That’s how I feel when I find out the founder of my fave brand is a racist.

For a long time I went back and forth about returning to this platform and each time I couldn’t do it. Sometimes it was because everything was going great and I didn’t want to ruin it, other times I wasn’t feeling well and knew I would be overwhelmed. I would keep putting it off – after my birthday or after Christmas or Spring would be better. Just a few weeks ago I was talking with my sister about never coming back at all. That hurts to think about. I built something from the ground up and was pretty successful at it and enjoyed it a lot in the beginning. I wonder how many other Black people have walked away from this industry because they just couldn’t keep fighting for inclusion or because they were sick of hustling harder and longer to not even reach the same levels as their white peers? It is a global story across all industries, but in this one – a new digital frontier, it shouldn’t be.

So how do we move forward? Honest conversations with each other and with your audiences is a good place to start. Why were you so comfortable only seeing people like yourselves on trips? Why didn’t it bother you that there were rarely, if any, Black people at events? How welcoming were you? Did you ever try to speak to anyone different to you? We as Black and minority people are coming in to spaces that you have made exclusively yours with years of racial trauma and it can be really hard to open up and be out going. Can you understand how intimidating it is to try and break in to an industry so openly racist while dealing with the lifelong pain of racism? Look around, how many Black and brown women come close to the reach and power of those at the top of this industry. Why are any of you ok with that?

It is disheartening to rarely see someone who looks like you being featured by a brand you love and support. I have scrolled through quite a few skincare accounts on Instagram and only spotted two or three “ambiguous” people of colour out of hundreds of posts and that says a lot about how a brand views diversity. It feels lonely. When white people see their face reflected it is validating and empowering, when I see the absence of people like me it’s alienating and discouraging. I truly believe that how we behave in our day to day lives has a big impact on what happens on a global scale. At the moment, the skincare industry is complicit in causing harm to Black people. We need to normalize inclusion because without it “preferences” become prejudices and whether intentional or not this encourages racism.

Something new needs to happen at all levels. For example, the British Beauty Council has such poor representation to the level of tokenism (three Black women and one Indian woman). This cannot continue because if you think for a second that the leaders of change in the industry should be the same people who created the problem then you don’t understand the issue at all. It is time for the white women who have perpetuated and benefited from racism and discrimination to stop centering themselves and create space for others to speak. It’s not about you, it’s about us and we need to be at the forefront of the conversation. Black and WOC voices have been kept on the periphery of this industry for too long.

As for me? I am going to try harder too. I am here to reclaim my space and hopefully work towards a better industry and world. I am going to stop hiding, speak up more and maybe (after my surgery) put myself out there more. It is my responsibility to keep knocking at the doors and demanding that Black and minority people like me are included. I will no longer be shamed into silence. Talking about my experiences is not “pulling the race card” but that’s exactly what you do every time you discriminate against us, the card is just pulled in your favour. I don’t want to fight or be angry anymore. I want to talk and work together to actually make a difference this time because we as an industry and world cannot keep doing this.

Cult Beauty: £10 off your first order (or new account) when you spend £50 or more, plus free shipping and samples.

Space NK: £10 off your first order (or new account) when you spend £40 or more, plus free shipping and samples.